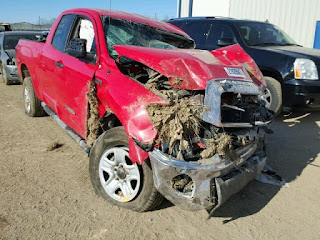 A Red color Toyota Tundra kills a man today on Mile 2 Express way. According to some witness in the scene of the incident, the young man who happens to be the victim was a Lawyer, they reported, "He went to settle a case in the magistrate court in Ikeja, on His way coming back home after dropping from a comatial bus "Danfo" He wanted to cross the high way when the car knock him dead. Some bike men who withness the incident quickly follow up the the car when the driver wanted to escape. He was finally caught and captured in Front of Lacasera Company close Mile 2. The driver is in custody of Nigeria Police now.
Oh No!!! Toyota Tundra Knock Man Dead Along Mile 2 Express Way Lagos