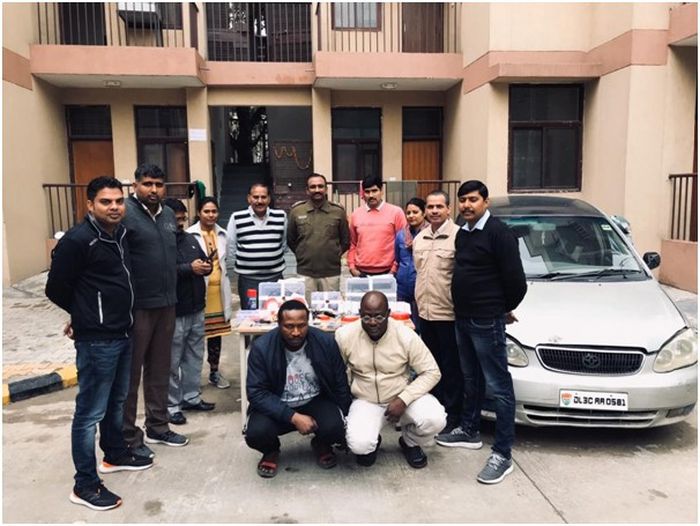 A Nigerian man who earlier served as a priest at a church in Greater Noida has been arrested, along with his “assistant”, also from Nigeria, for cloning dozens of plastic cards in Delhi, India.

The duo identified as Oluwatoyin Isaiah (46) and his assistant, Nosa Tony (43) were arrested after a brief chase near D1 Market in south Delhi’s Vasant Kunj on Friday.

They had with them 37 cards that had already been cloned, 10 blank cards, and a host of devices used in the fraud, said Devender Arya, deputy commissioner of police (south-west).

It is alleged that they were able to clone the ATM cards by fixing skimming devices and secret cameras at ATM centres in Delhi. The police, however, are yet to determine the scale of their alleged fraud.

“Isaiah was living on an expired visa after arriving in Delhi in 2012 on a medical visa. We recovered two passports from him. They have different names and numbers, but both have Isaiah’s photo,”

The officer said that having overstayed his visit, Isaiah had tried his hand in the hair export business, apart from his two-year-long stint at the Greater Noida church, before coming into contact with a Bulgarian man, Eris, at Delhi airport last year.

“Eris taught Isaiah how to clone cards. They purchased a skimming device from an e-commerce site and procured the other devices a variety of sources,”

Isaiah sought Tony’s help for the second step, which the police said wasn’t as risky as the first. The latter has been living in Gurugram since last year on a business visa.

Once they had everything, all they needed to do was either withdraw cash discreetly from ATMs or spend the money in the cards for online purchases.

The two were arrested after the south-west district police was tipped off about their whereabouts. Eris remains on the run, said the police.

“They were headed to an ATM to commit a crime. Most of the items we recovered from them were found in a bag they were carrying,” the DCP said