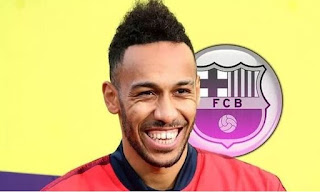 Barcelona on the hunt for a replacement for Luis Suarez, who is out injured until the end of the season.
The Catalan giants are desperate to add to their firing line before the window shuts on Friday.
And according to the Telegraph, they’ve made Aubameyang their No 1 target.
Arsenal are said to be monitoring the interest from Barca, who have lined up Valencia hit-man Rodrigo Moreno as their second choice.
But the Telegraph also say that Aubameyang would be open to a move to Barcelona, despite his apparent happiness at Arsenal.

“As far as I know, I think a week ago, we were discussing that he said he was so happy, that he didn’t agree with the things that were being written in the media, that he has his future here,” Arsenal boss Mikel Arteta said last week.
“I’m so happy with that so that’s where I’m standing at the moment.”

Arsenal may part with Aubameyang if a hefty bid comes in for him, and they’re demanding upwards of £50million.
Aubameyang, 30, has 18 months remaining on his contract, however, and could see his value decrease drastically in the coming months.
If he decides to stay this month, it’s still likely that Aubameyang leaves in the summer, with contract talks still at an impasse.
Arsenal Striker Aubameyang Could Still Make Shocking Move To Barcelona