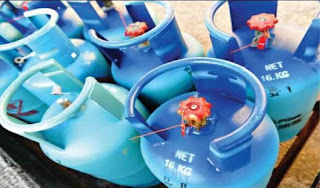 The federal government has commenced distribution of 13,000 cooking gas cylinders to rural women in Nasarawa State.

Minister of Women Affairs Mrs Pauline Tallen, while flagging off the distribution exercise in Lafia, said it was the first phase of the National Cooking Gas Project and Tree Planting Initiative of the federal government across the state as part of efforts to check hazardous emissions.
She said President Muhammadu Buhari has directed the supply of cooking gas cylinders to 1,000 rural women in each of the 774 LGAs across the country. The project launched in Nasarawa State would be executed in three phases across the country.

“The timing of the project is apt in view of the world’s attention towards reducing the effects of greenhouse emissions on earth.” According to the World Health Organisation (WHO), emission from cookstoves kills about 4.3 million people annually through air pollution and indoor smoke inhalation causing respiratory diseases and death.”
Similarly, the minister flagged off economic trees planting exercise as part of efforts towards addressing the effects of deforestation and climate change.
“This is also in line with Mr President’s pledge at the United Nations General Assembly session in 2019 to plant 25 million trees within one year,’’ she said.
Governor Abdullahi Sule, in a speech at the occasion, commended the federal government for the initiative and for choosing Nasarawa State for the pilot phase.
He urged the people of the state to embrace the use of clean stove for cooking rather than firewood given the related poisonous gas emissions. Sule pointed out that Nasarawa State had already keyed into the tree planting campaign having launched it in August 2019 in Akwanga Local Government Area.
He, therefore, called on the people to imbibe the culture of tree planting by replacing any tree felled with three new ones.
Hajiya Halima Jabiru, Nasarawa State commissioner for Women Affairs and Social Development, lauded the federal and state governments for their women-friendly dispositions.
She urged the beneficiaries to use the cooking gas cylinders for the purpose they are meant as the ministry had taken measures to ensure they do not sell them.
FG Distributes 13,000 Cooking Gas Cylinders To Rural Women In Nasarawa