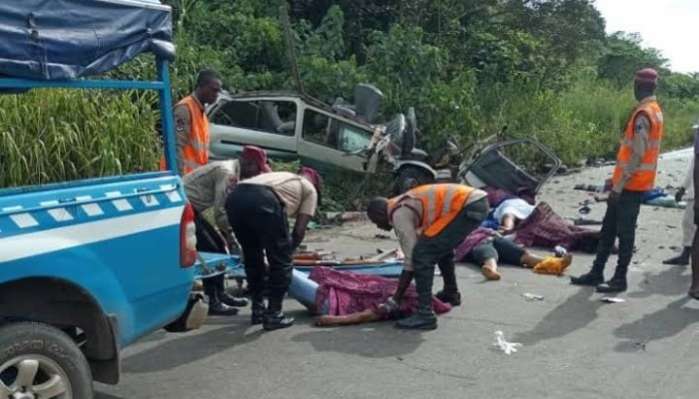 The Federal Road Safety Corps Command in Ogun State, on Wednesday, confirmed the death of one person following an auto crash on Ijebu Ode-Ore Expressway.

The state FRSC Sector Commander, Mr Clement Oladele, made this known while speaking with newsmen in Ota.

Oladele said the lone accident happened about 11.25pm on Tuesday.

He explained that a Toyota Sienna Bus, with registration number, FKJ 453XW, was speeding when its tyres burst and in the process lost control and somersaulted into the bush.

He said nine persons five male adults, three female adults and a female child — were involved in the accident.

“The corpse of the female victim has been deposited at the mortuary of General Hospital, Ijebu Ode, while two of the survivors are also receiving treatment at the same hospital.

“The third survivor who is a child was taken to Ise Oluwa Clinic J3 by a Good Samaritan before the arrival of FRSC rescue team,” he said.

The sector commander admonished motorists to desist from using imported used tyres and also ensure that they check the expiring date on the tyres before purchasing them to avoid unnecessary loss of lives and property on the highway.