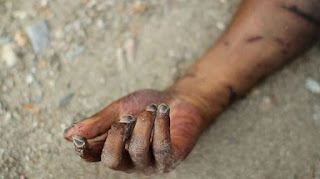 According to Sun News, the Lagos State Chief Magistrates’ Court, Ebute Meta, yesterday remanded a former policeman, Joseph Oriyomi, in Ikoyi Correctional Centre over alleged murder of a housewife.
Oriyomi ,allegedly shotTemilorun Obasa, 45,while dispersing some youths during a communal clash between Ilaje and Ajah communities, in the State The prosecutor, Inspector Oladele Adebayo, told the court that during a protest on December 31, 2019, Oriyomi fatally shot Mrs Obasa, in a bid to disperse the crowd.
The defendant’s plea was not taken by the magistrate court because it is not constitutionally empowered to try the offence of murder.
However , Chief Magistrate O.O. Olatunji, ordered the police to send the case file to the State Director of Public Prosecutions(DPP), for legal advice and adjourned the case until February 27 for mention.
Police Officer Shot Housewife To Death While Dispersing Some Youths During Communal Clash