PDP Demands CJN Tanko’s Resignation, Nigerians No Longer Have Faith In Him 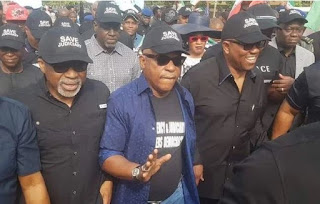 The Peoples Democratic Party, PDP, has asked Justice Tanko Mohammed to resign as Chief Justice of Nigeria and Chairman of the National Judicial Council because Nigerians have lost confidence in him.
The demand was made by the opposition party on Friday when its leaders protested at the United Kingdom (UK) and American Embassies in Abuja.
According to the PDP, there is an alleged plot by the ruling All Progressives Congress (APC) to stifle opposition in the country.
The protest was attended by the National Working Committee (NWC), Board of Trustees (BoT), National Assembly members as well as women and youths.
The party’s National Chairman, Prince Uche Secondus who led the protest first submitted a petition to the American Embassy and later to the UK embassy.

Addressing newsmen at the US Embassy, Secondus said,

“They should advise the government to obey the rule of law. We are passing through challenging times. Mr President has lost control. Our nation is in pain and as a party we cannot keep quiet. ”
“This country belongs to everyone; every citizen. This is not the time for propaganda. It is not time for the Presidency to respond to criticisms.
“The issue is that people are dying of poverty and hunger every day. But the present government is not understanding the issues. So we are here to submit a petition,” Secondus said.

In the petition, the opposition party called on the United States and the international community to “take more than a passing glance” and prevailed on the Supreme Court to reverse its verdict on Imo governorship election which sacked its candidate as governor in order to “avoid an imminent breakdown of law and order.”
“Our demand is that Justice Tanko Mohammed immediately steps down as CJN and Chairman of the National Judicial Council as Nigerians have lost confidence in him and a Supreme Court under his leadership,” the PDP said.
PDP Demands CJN Tanko’s Resignation, Nigerians No Longer Have Faith In Him

Reviewed by Admin on 01 February Rating: 5
Category : News
DO YOU WANT YOUR SONG / VIDEO ON PRETTYLOADED?